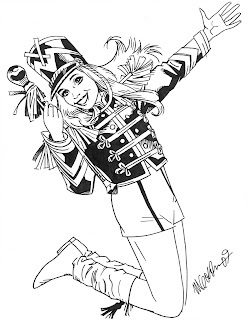 Just a note to inform all of you of our sketch policies for one of our artists in high demand, Michael Golden.

Currently, Michael's take home list if full. He is not accepting any commissions to be done at home, until the current list is finished. And even then, he will probably only open the take home list for cover-quality pieces. Not convention sketches. Since he is so busy with other projects, and just life in general.

His take home list has been very lengthy, mostly my fault, since when he first came back on the convention scene in 2006, I under-estimated the demand and charged too little. On top of that, Michael just isn't capable of doing "sketches." He does finished pieces. Those are things you just can't bang out.

Good news is that his take home list is almost done. Bad news is, as said, it probably won't open up again. That's the short story.

Michael, will however be sketching at any appearances and conventions at which he is scheduled to be. If anyone is interested in convention rates, they can contact me at: evaink@aol.com

Note that Mr. Golden takes around 1 hour or more to do a full-figure sketch, so his space at any show is limited.

And finally, those of you on the take home list still awaiting your sketch-- which there are very few of you now. Baggering me, threatening me, harrassing me, calling me names--etc. etc.--is not going to get that sketch any quicker. Granted, it won't delay it either. I'm not that petty. But it won't expedite things.

Michael is one person. I wish there were two of him. Believe me I do. Or THREE! Can you image how awesome that would be! The work we could get done!

For those nice folks out there, waiting. Thank you. :-) You are awesome. And Michael is adding extra bells and whistles for those who have been waiting. :-)

1.) Take home list is full.
2.) Not accepting any more take home requests.
3.) If you are on the list, you will get your ordered sketch. No guarantees on time, but he's almost done with his list.
4.) Studio Commissions list will probably not open up again, except for cover-quality commissions, of which we'll accept 2 at a time, only.
5.) Golden will still sketch at conventions.
6.) When the cover quality commission list opens up, I'll announce it here.

Thank you all for your interest in Michael's work.

Hope to see you down the road.