In the News--New Bubble on the Horizon! 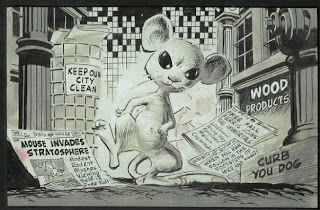 Got this message from my friend Ray regarding the upcoming commodities bubble. Athough Arthur has been telling me for months that he also suspected this same bubble was looming....looks as if he might be right. And here I was going to go and change my remaining $20 into gold, LOL....it's always something.
FYI, I love the above illustration by one of my favorites, Wally Wood. I'll call it, "In the News." --R. :-)
___

“We have the mother of all carry trades,” Roubini, who predicted the banking crisis that spurred more than $1.6 trillion of asset writedowns and credit losses at financial companies worldwide since 2007, said via satellite to a conference in Cape Town, South Africa. “Everybody’s playing the same game and this game is becoming dangerous.”

The dollar has dropped 12 percent in the past year against a basket of six major currencies as the Federal Reserve, led by Chairman Ben S. Bernanke, cut interest rates to near zero in an effort to lift the U.S. economy out of its worst recession since the 1930s. Roubini said the dollar will eventually “bottom out” as the Fed raises borrowing costs and withdraws stimulus measures including purchases of government debt. That may force investors to reverse carry trades and “rush to the exit,” he said.

“The risk is that we are planting the seeds of the next financial crisis,” said Roubini, chairman of New York-based research and advisory service Roubini Global Economics. “This asset bubble is totally inconsistent with a weaker recovery of economic and financial fundamentals.”

The MSCI World Index of advanced-nation equities has surged 65 percent from this year’s low on March 9, while the MSCI Emerging Markets Index has jumped 96 percent. The Reuters/Jefferies CRB Index of 19 commodities has added 33 percent.

Roubini said he sees a bubble in emerging-market equities and that gains in some developing-nation currencies are becoming “excessive.” The rally in oil “is not justified by the fundamentals,” he said.

An asset “bust” may not occur for another year or two as a “wall of liquidity” pushes prices higher, Roubini said. In a carry trade, investors borrow in countries with low interest rates to invest in higher-yielding assets.

Roubini said the U.S. recession seems to be over, though the economic recovery in advanced nations will be “anemic.” He’s “more optimistic” on the outlook for emerging-nation growth.

The U.S. economy probably expanded at a 3.2 percent pace from July through September after shrinking the previous four quarters, according to the median estimate of 65 economists surveyed by Bloomberg News before the Commerce Department’s report on gross domestic product due Oct. 29.

The economy shrank 3.8 percent in the 12 months to June, the worst performance in seven decades.

Roubini’s July 2006 warning about the financial crisis protected investors from losses in the Standard & Poor’s 500 Index’s worst annual tumble in seven decades. The U.S. equity benchmark has surged 58 percent from a 12-year low in March even as Roubini said that month the advance was a “dead-cat bounce,” that it may “fizzle” in May and warned in July that the economy is “not out of the woods.”

The S&P 500 gained was little changed at 1,067.30 as of 12:44 p.m. in New York, while the MSCI emerging markets index lost 1.8 percent. South Africa’s rand dropped 0.9 percent against the dollar as developing-nation currencies weakened. Crude oil for December delivery added 1.2 percent to $79.60 a barrel.

To contact the reporter on this story: Michael Patterson in London at mpatterson10@bloomberg.net.
Posted by Eva Ink Artist Group at 2:40 AM