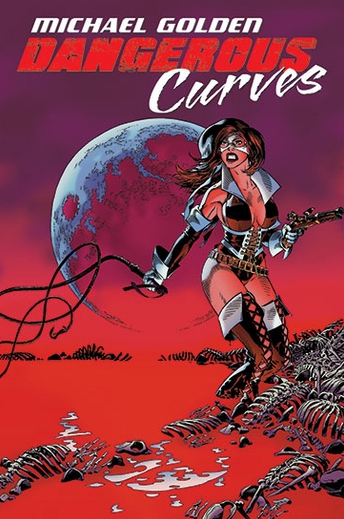 Chicago-- Fresh off the presses, the new hardcover, deluxe format, full color sketchbook by Michael Golden will debut at the upcoming Wizard World Chicago show, Aug. 21-24, at his table in the Featured Artist section of this year's show.

"Michel Golden: Dangerous Curves" is a lush book, at 48 pages, full of powerful pieces by this renowned artist and storyteller.

But why call it "Dangerous Curves?"

Because the name is multi-layered. Golden is known for his strong female characters with their piercing eyes (and yes, curves). And indeed, Michael always says that the first thing he draws for any female character IS the eyes--the window to the soul. And each of Golden's women express their own strength and individuality on every page, drawn in an authentic and complimentary style.

But "Dangerous Curves" also features other characters--those that lurk around the corner as well as those that seek adventure--providing a good sampling of familiar characters, human and otherwise, providing the drama and/or confronting it.

Being the master storyteller that Michael is, known for his work on "G.I. Joe," "Spawn," "Bucky O'Hare," "The 'Nam" and much more, of course each piece in this book tells a story of it's own on each page, with a solid and substantial art style that roots them firmly in your imagination.

In addition to the new book making it's debut at the show, with the artist in attendance to sign it, all VIP packages for the show will include a free Michael Golden poster in a  limited edition.  Ask for details on the Wizard World convention website!

"Michael Golden: Dangerous Curves" is limited to 1,000 copies. So, if you haven't ordered yours from Diamond Distribution, you can still order one while supplies last from evaink@aol.com

For more information on the artist or for ordering, contact evaink@aol.com