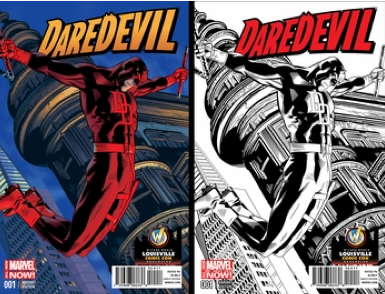 Marvel Comics and Wizard World, Inc. (OTCBB: WIZD) today revealed the latest edition of its 2014 series of exclusive variant covers of the best Marvel titles with the unveiling of Daredevil #1, drawn by veteran artist Michael Golden. VIP attendees at Wizard World Louisville Comic Con, March 28-30 at the Kentucky International Convention Center, will receive a free copy of the limited-edition book at registration.

Golden is scheduled to be on site at the event to sign copies (autograph fees may apply). Leading professional comic grader CGC will also be on hand to accept books for grading and Signature Series.

The colored version of Daredevil #1 will be limited to 3,000 copies and provided free at registration to all Wizard World Louisville Comic Con VIP attendees, including any celebrity VIP packages. The Black & White sketch version is limited to just 2,500 copies and will be available for sale at the Wizard World Store on the convention floor. Quantities per purchase may be limited.

“Having the entire Eisner-Award Winning Daredevil creative team back to help bring the series into All-New Marvel NOW! has been a real treat for us,” says Marvel SVP, Sales & Marketing David Gabriel. “We’re proud to partner with Wizard to commemorate the launch of this exciting new title by having the legendary Michael Golden contribute an exclusive variant.”

Golden, co-creator of the X-Men’s Rogue character, Spartan X and Bucky O’Hare, is known worldwide for his groundbreaking work on “The ‘Nam,” “Micronauts,” “G.I. Joe Yearbook,” and “Dr. Strange,” among many other works. He is counted as one of the best cover designers and storytellers in the business.

“Michael is one of the most popular artists to attend Wizard World Comic Con events, as evidenced by his very well-attended ‘Storytelling’ panels and the lines of fans at his table.” says John Macaluso, Wizard World CEO. “Daredevil #1 is a perfect addition to what has proven to be Marvel’s very successful series at our shows.”

Join Marvel’s fearless hero as he begins his most awe-inspiring adventure yet in the sunny city of San Francisco! Gifted with an imperceptible radar sense and a passion for justice, blind lawyer Matt Murdock—a.k.a. Daredevil—protects the Golden City’s streets from all manner of evil. But big changes are in store for Matt Murdock as old haunts and familiar faces rise to give the devil his due. Hold on tight, because here comes Daredevil…the Man Without Fear! Written by Mark Waid and illustrated by Chris Samnee. 32 PGS./Rated T+

For more on the 2014 Wizard World Louisville Comic Con, go to http://www.wizardworld.com/home-louisville.html.