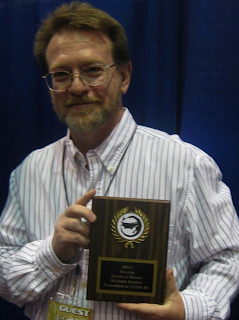 Co-creator of the X-men's Rogue character, Spartan X and Bucky O'Hare, Mr. Golden  is known worldwide for his groundbreaking work on "The 'Nam," "Micronauts,"  "G.I. Joe Yearbook," and  "Dr. Strange, " among MUCH more, and is counted as one of the best cover designers and storytellers in the business.

Golden has been one of the most influential creators around for the last several decades:

Recent books covering the colorful life and amazing art of Michael Golden include a Manga version of the "Bucky O'Hare" series, created with Hama, as well as the top selling art retrospective "Excess: The Art of Michael Golden," written by Renee Witterstaetter, which sold out and has gone into a second printing, as well as his recent sketchbook "Heroes and Villains," and the just released NEW sketchbook, "MORE Heroes and Villains."  His cover work is featured on the children's book "Kerry and the Scary Things."  In addition, several DVD's have been produced on Michael and his career, including "Creator Chronicles: Michael Golden," featuring an extensive interview and tutorial with the creator, as well as "Modern Masters: In the Studio with Michael Golden."

As a conceptual cover artist, Golden has penciled everything from Batman and Captain America to Vampirella!  And the list keeps growing.

Michael has served as an Editor at DC Comics as well as Senior Art Director at Marvel Comics, and has worked on scores of movie production projects, new ones currently in development. His art has been the focus of gallery shows in places as diverse as Gijon, Barcelona, New York, Antwerp and Brussels, while his class on storytelling has been conducted from Spain to Brussels to France to Canada to the United States... and most recently China.

For more information on Michael Golden and his work, contact:

www.evainkartistgroup.com
Posted by Eva Ink Artist Group at 9:09 AM